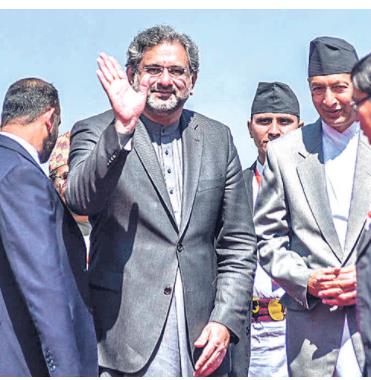 A joint military guard of honor was given to Pakistan’s Prime Minister Shahid Khaqan Abbasi, in Kathmandu, Nepal in the first week of March, 2018. Since, 1960 however, only a few bilateral visits have been there. Since the last two decades this has been the first official visit by any Pakistani head of the state. The last Pakistani visit was by PM Benazir Bhutto’s in 1994. Other than previous SAARC (South Asian Association for Regional Cooperation) summits like in 2014, this kind of bilateral visit by Islamabad is unusual.

One of the most important agenda of  this visit was  to ensure the continuation of  SAARC . Pakistan has been extremely skeptical about India’s stance taken in cancelling the last SAARC summit in Islamabad, Pakistan in 2016, citing Pakistan’s involvement in fomenting cross border terror attacks. The other South Asian nations of Bangladesh, Bhutan, and Afghanistan also supported India’s position on SAARC and joined the boycott.  Meanwhile India’s interest in another regional grouping, i.e. the Bay of Bengal Initiative for Multi-Sectoral Technical and Economic Cooperation (BIMSTEC) — which includes Bangladesh, India, Myanmar, Sri Lanka, Thailand, Bhutan, and Nepal as members — is seen as an alternative to SAARC by Pakistan.

This visit is hence taken as to maneuver strategies to invigorate their bilateral relations and to push the SAARC agenda on the forefront as Nepal holds the current chair of SAARC. PM Abbasi also addressed the program organized by SAARC secretariat that clearly indicates Pakistan’s sheer interest in hosting for next SAARC summit. Moreover,, economic cooperation and bilateral trade relations, Pakistan’s PM also announced an increase in scholarships to Nepali students in Pakistan.

On the other hand Nepal has always been a significant and worthy neighbor for India in South Asia. Since China is set up to build a ‘Sino centric’ stage in Asia, and also looking into the current shaky relations between India and Nepal, China is more alert and inspiring to a strategic Nepal-Pakistan relation to counter and make its presence in India’s proximity.

There are certain issues which are of Indian concern, as Pakistan is diplomatically operating with Nepal with vested mutual interest of Beijing and Islamabad both. Prime Minister Khadga Prasad Sharma Oli, the new PM of Nepal is known as a pro-China and considers India’s role in the fall of his government in August 2016, hence there could be a possible development of a rugged situation between India and Nepal in near future. The differences arose after Nepal’s proclamation of new constitution that came up in September, 2015 as there were claims that the  new constitution politically discriminated against 51% of the Madhesis, Tharus and other janjatis. India’s concern was its border as New Delhi wanted to stay away from protests and agitations taking place over political rights in Nepal that could seep into India through its porous border.

China and Pakistan already declared their all-weather friendship and China has been playing the big brother role to Pakistan. Nepal is already participating in the ambitious project of China’s Belt and Road Initiative. Moreover, recently China also ended India’s monopoly in internet services this year in Nepal. China’s infrastructural developments in Nepal, like building up of roads and railway lines, could lead to the end of dependency of Nepal on India for land routes trade. This weaning out of Nepal from India could be a major strategic achievement for Pakistan and China both in the region. The emboldening relations between Nepal and Pakistan will also advance their regional configuration which will give Nepal more options other than India and that is what precisely Pakistan and China want. One more area of concern for India would be to stop China’s entry in to SAARC, as Pakistan and Nepal are determined to bring China into the chapter. Before 2014, India successfully pushed back this proposal, but how far India would stall the move further as it did it in the past is a matter of concern.

The vibrant round of bilateral talks between Nepal and Pakistan to resurrect SAARC, regional connectivity and better economic relations ended with a suggestion to Nepal to use the Gwadar Port in Balochistan via the Kerung-Tibet railway line for its economic activities. Moreover, it seems that Pakistan is looking desperately towards Nepal as a game changer in South Asia.

Ipshita is a contributor for Nepal Matters for America

Published by Nepal Matters for America

View all posts by Nepal Matters for America