DAS of Defense for South and Southeast Asia Dr Joe Felter — “welcome to the community of think tanks in the US!”

Ambassador Extraordinary and Plenipotentiary of Nepal Dr. Arjun Karki — “doing a great help for us.”

We are a team of experienced academics, commentators and researchers, including university level interns, from both US and Nepal. 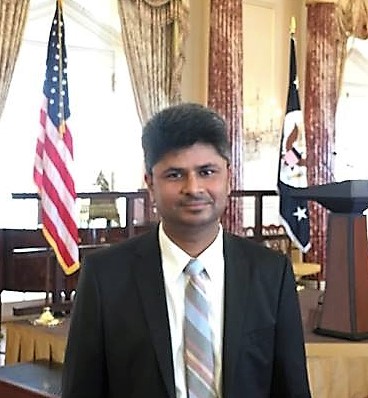 Anil Sigdel holds a PhD in political science/international relations from the Institute of Political Science, University of Vienna, Austria. He holds a Master degree in International Studies from the Diplomatic School of Madrid where he was  merit scholar under the Spanish Agency of International Cooperation and Development, Ministry of External Affairs, Spain. Dr. Sigdel is a native Nepali. He  speaks native level Hindi. He is also fluent in English, Spanish and German, and speaks some French and Mandarin Chinese. His views, commentaries and quotes have appeared in Foreign Policy, Atlantic Council, National Interest, Real Clear, Hudson Institute and East West Center in Washington; South China Morning Post-Hong Kong, East Asia Forum-Australia, Observer Research Foundation-New Delhi, People’s Daily China, The Kathmandu Post, Kantipur, Online Khabar in Nepal and TRT World- Istanbul, Buenos Aires Radio, Argentina, Bosnian TV and many more.  He was contributor at Hudson Institute’s South Asia Program in Washington (2016-19), a highly influential policy think tank on international security in the United States. He is author of the book India in the Era of China’s Belt and Road Initiative (October 2020), Rowman and Littlefield’s Lexington imprint, Washington DC. He is also founding member of the prestigious Nepal Policy Institute, (ranked as World new best think tanks 2020 by University of Pennsylvania ranking) based in Hague and Kathmandu, a border-less policy think tank comprising of outstanding international academics and practitioners of Nepali heritage. Anil is also associated with some strategic groups and academic institutions in Europe – he has recently been appointed as an Associate Professor of International Relations at SNSPA, Bucharest. He is also an independent consultant on international relations and geopolitics with focus on Asia and has given lectures and talks at different institutions including State department in Washington to National Planning Commission of Nepal and so on. Sigdel is often travelling and living in between US, Europe and Nepal.

Prof. McDonnell ret. holds a BA in philosophy from Saint John’s University (small Catholic college in Minnesota) and a MA in English from University of Minnesota. He has a PhD in English from University of Minnesota. He was a member of English Department at Ohio University (Athens, Ohio) and Chairman and Professor of English Department, Western Washington University. He was then Chair of English Department, California Polytechnic State University, San Luis Obispo, CA, and then just a Professor until he retired. He is a co-author of 5 textbooks and is listed in Directory of American Scholars and in Contemporary Authors. He was a member of the Washington (state) Commission for the Humanities, and also had MA in psychology at Pacifica Graduate Institute.  He also was a     licensed Marriage and Family Therapist in California and Washington, now retired.

Purushottam Sigdel is the Interim Executive Director at Nepal Matters for America – he joined in August 2020. Mr Sigdel brings invaluable story and experience from Nepal to the United States with long experience in diplomacy and public administration. He is a naturalized American of Nepalese heritage and also speaks fluent French and Spanish. He lives in Washington DC area with his family. 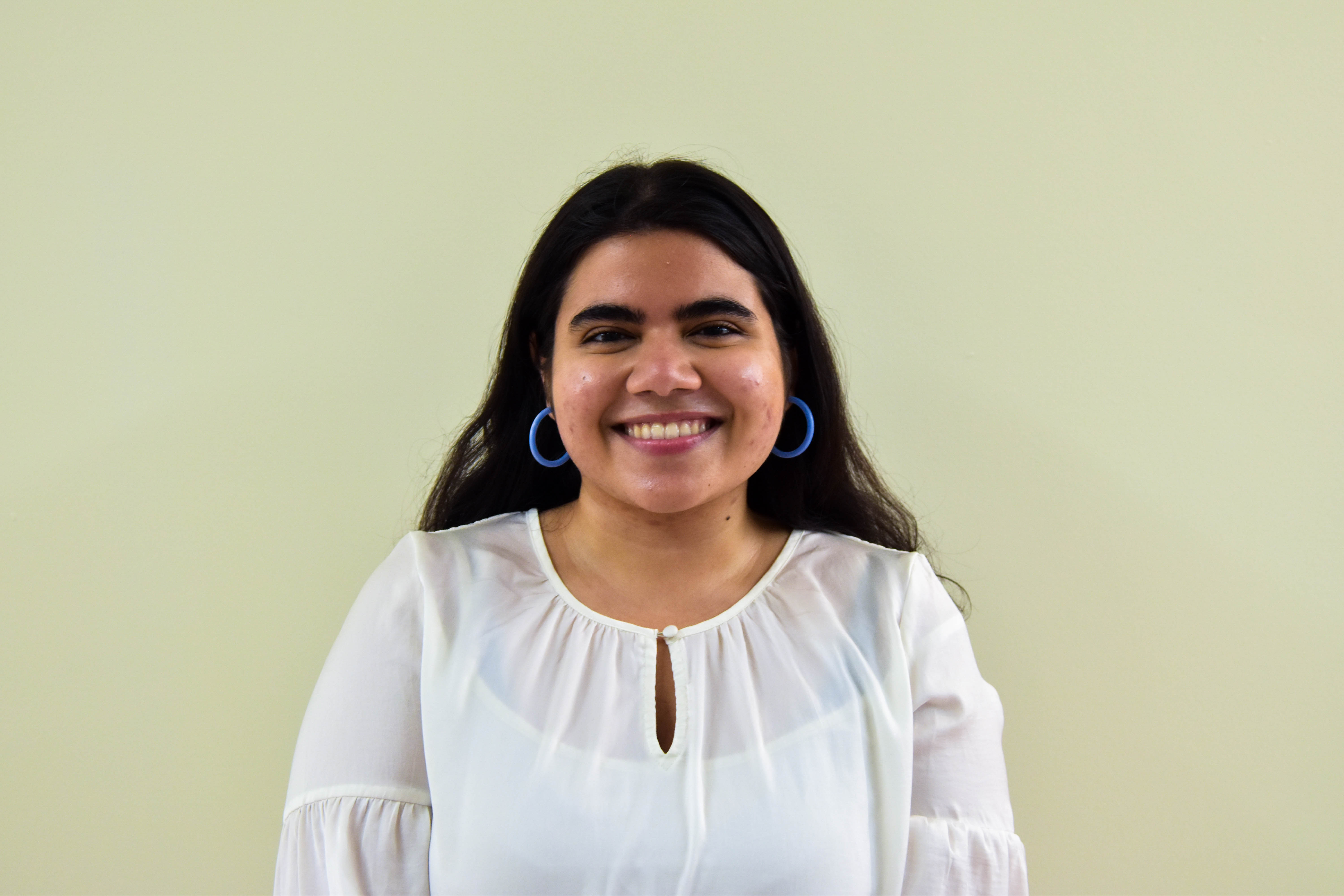 Maneesha Khalae is a senior studying International Relations and Economics, focusing on Asia and International Business, Economics, and Politics. She is deeply interested in the nexus between politics, institutions, South Asia and the environment. She is currently writing a thesis on India’s water related conflicts with its neighbours and hopes to work in a think tank and eventually academia. When she’s not studying international trade, she can be found reading anything by Kiran Desai and Elif Shafak or trying new food from around the world.

Janja R. Avgustin holds a Master’s Degree in Diplomacy and Military Studies from the Hawai’i Pacific University and has obtained her PhD in International Relations at the University of Ljubljana. Her research focuses on the use of force in international relations, especially in cases where the use of force has been authorised by the UN Security Council and is being executed by a group of states (and not under the auspices of the UN or another international organisation). Her research page www.unscramblethesc.org focuses on all aspects of UN SC resolutions; she hopes to influence the debate on how we understand and study conflict by providing detailed analysis of UN SC processes. Her other research interests include military studies, historiography, conflict management, diplomacy and ceremony, quantitative methods, and computational models. Janja has experience as a lecturer and supervisor, and she also works as a trainer at international debate academies. Currently, Janja is employed at University of East Anglia where she contributes to Global Politics modules. She also continues to work as an Editor-at-large at E-International Relations where she is at the present co-editing a collection on Realism which will be published later this year. (all team members do voluntary contributions to NMA) 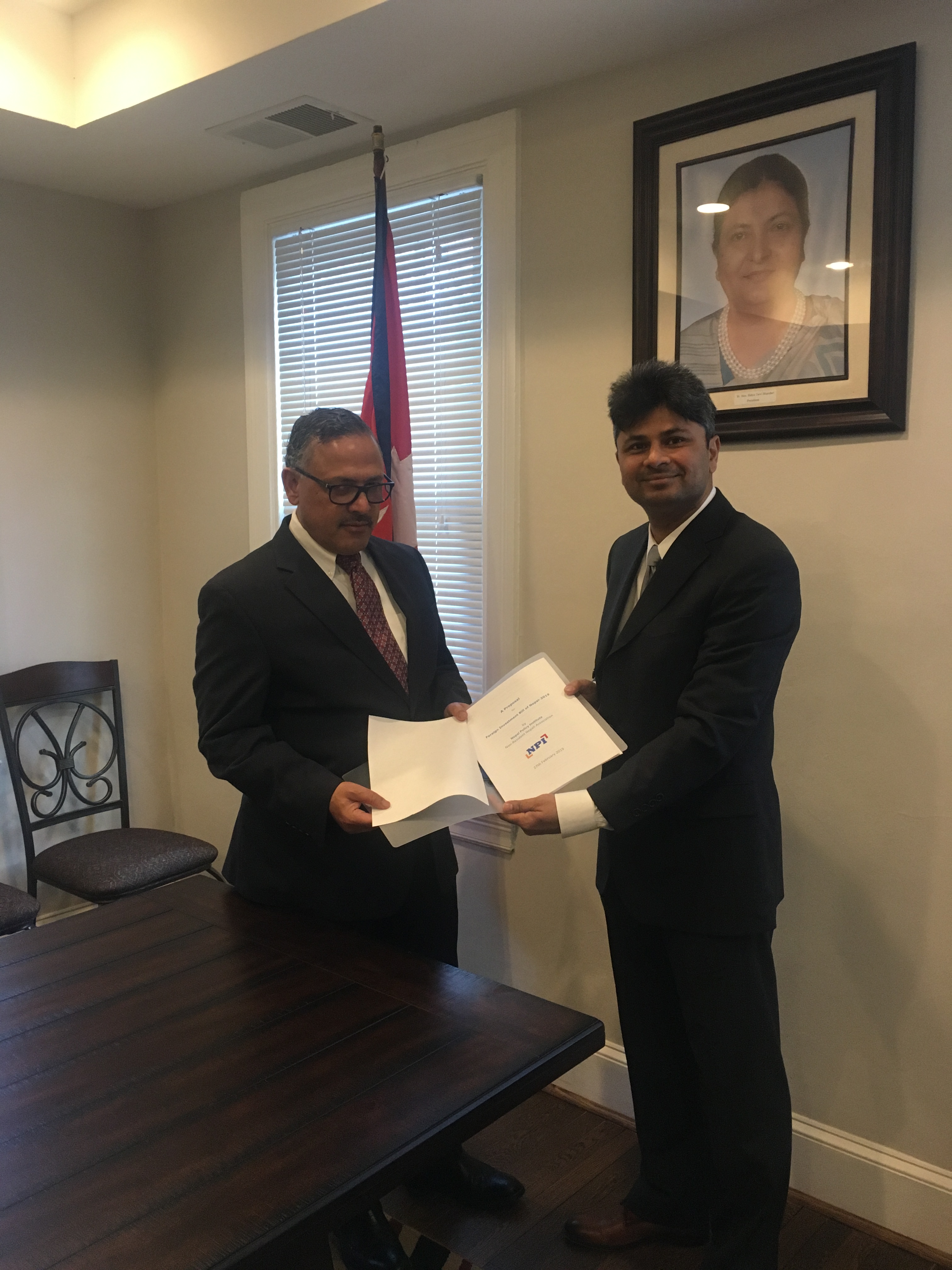 With Prof Steve Cohen (second from the left) at the Brookings Institution, Washington DC 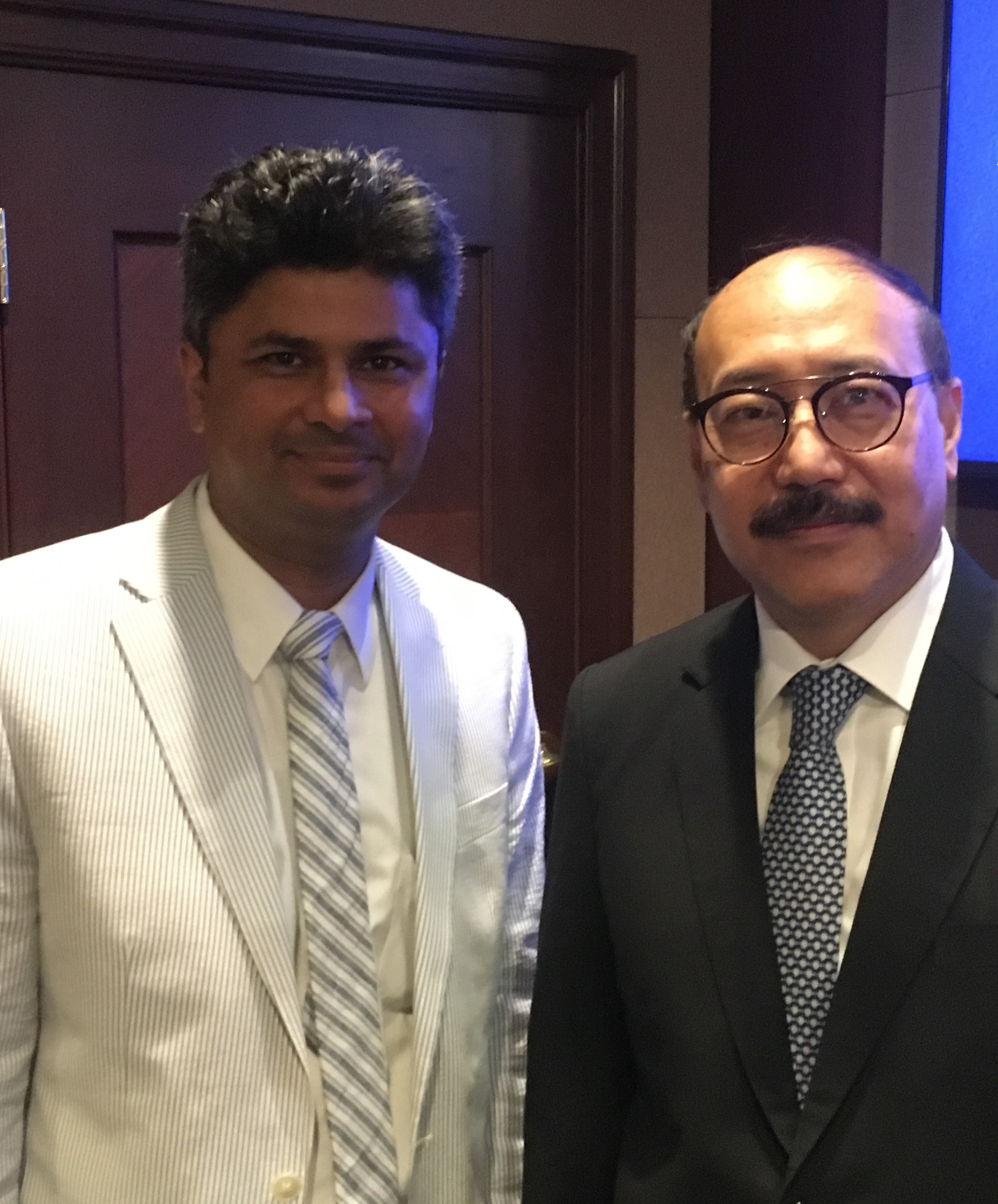 With His Excellency Indian Ambassador to the USA Harsh V Shringla

With Her Excellency US Ambassador to Nepal Alaina Teplitz at US Congress, Capitol Hill 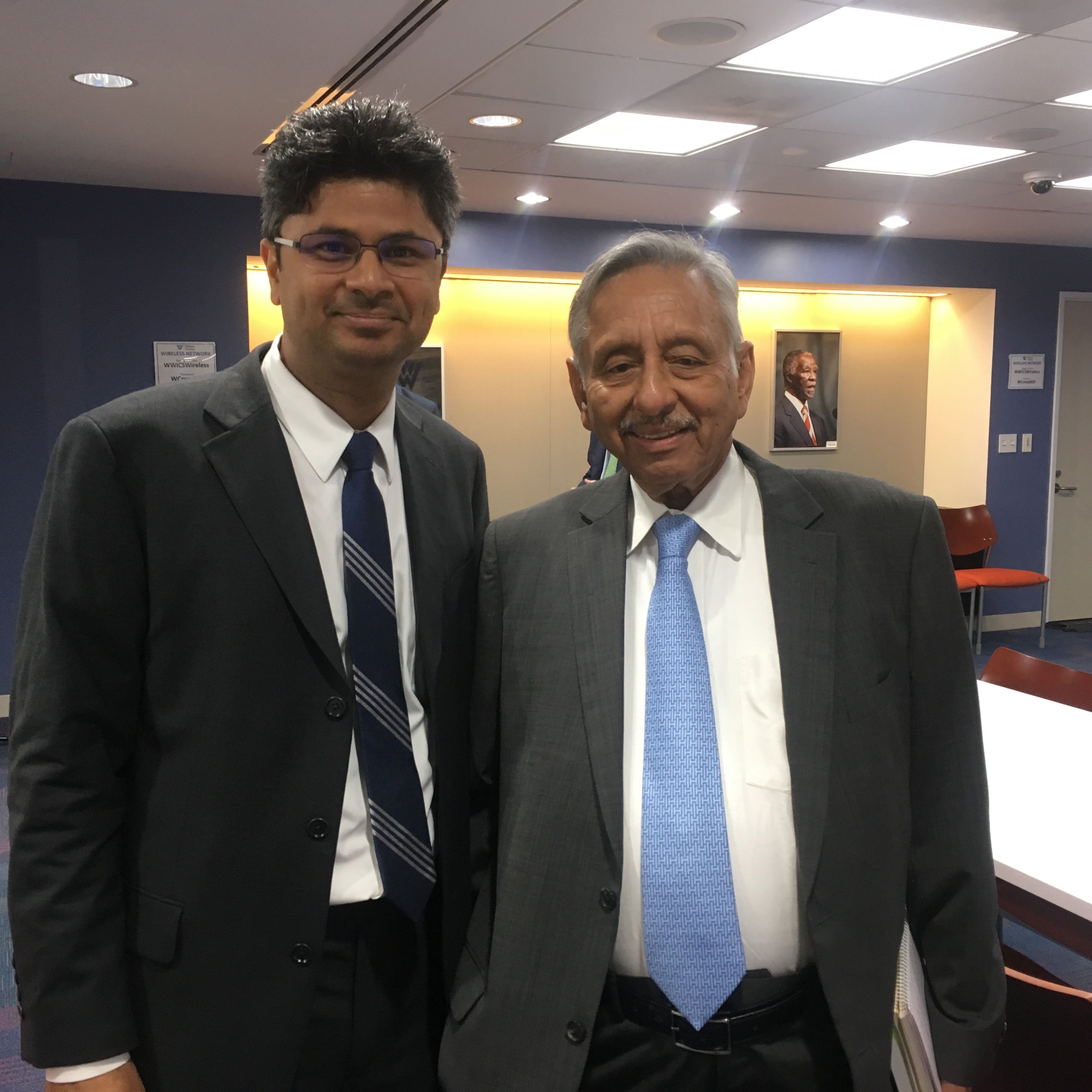